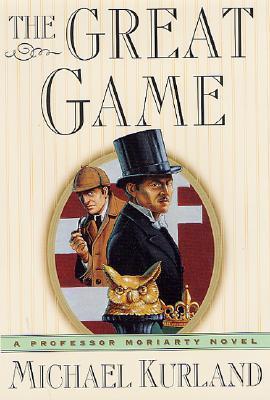 In this deliciously complex and abundantly rewarding novel from the author of The Infernal Device (a novella collection featuring Moriarty), Europe in the 1890s is on the brink of political cataclysm. Well before the Nazis, an Aryan brotherhood is bent on toppling Europe's major governments. Meanwhile, on the Continent, a loose group of young English aristocrats uses the privileges of class to gain entry to royal courts and the uppermost echelons of power.

Without official imprimatur, they begin "the Great Game," a nascent counter-intelligence movement. Disconnected information prompts Professor James Moriarty and Sherlock Holmes, separately, to depart England and hasten to Vienna. That such material entertains for page after page is a tribute to Kurland's remarkable talent. Multiple plots leapfrog across chapters in a perfect pace. Surprises abound. The characters – whether European nobles, Americans abroad, anarchists plotting the new world order, or a scene-stealing dwarf – are richly and convincingly portrayed. Dialogue sparkle with wit, erudition and unerring diction. The dwarf's cockney slang holds especial delights. This is no ordinary Holmes pastiche. Indeed, the Great Detective has little more than a cameo. Fans already acquainted with the author's brilliantly reconceived Moriarty, who is as much in advance over Conan Doyle's "Napoleon of Crime" as Shakespeare's Hamlet is over the historical Danish prince, likely pre-ordered this first full-length novel in the series as soon as they caught wind of it. Uncommon are the pleasures such writing affords.

"I have heard you referred to as 'the Napoleon of Crime,'" the duke interrupted.

"Yes," Moriarty replied dryly. "I myself have heard that. From the Javert of busybodies."

Sherlock Holmes is immortal. No other character has been so ceaselessly analyzed, dramatized, parodied, and especially in recent years ingeniously re-presented: to instruct and partner young Mary Russell in Laurie King's mysteries; to play second violin to his elder brother Mycroft and Irene Adler in series by Quinn Fawcett and Carole Nelson Douglas; to bumble, albeit eruditely, after a more efficient Inspector Lestrade in M.J. Trow's ribald tales. But in the beginning was Holmes, and none of these series or their many counterparts could exist if he had not been created.

Michael Kurland’s protagonist is Professor James Moriarty, and his ingenious strategy is not based on marginalizing or mocking Holmes, but on enlarging the scope of his nemesis. Moriarty is not simply the most dangerous man in London, as Holmes has asserted: he is the most dangerous man in Europe. As the story opens, Holmes, in a cocaine-induced paranoia, has been searching up the chimney and under furniture for a hidden Moriarty when the professor arrives at Baker Street, respectably sending in his card with Mrs. Hudson. The Kipling ballad used as an epigraph there is neither East nor West, Border, nor Breed, nor Birth, When two strong men stand face to face, though they come from the ends of the earth! sets the tone. The two strong men Moriarty the rational criminal mastermind, and Holmes the investigative genius will employ their complementary talents to outwit a madman bent on creating worldwide war through the assassination of heads of state.

And ah, the scope that this scheme for a story provides! Vienna! Palaces and prisons, garrets and elegant railroad cars. Royalty incognito, beautiful women, debonair men, criminals, spies (from every side), anarchists, petty criminals, dupes, magicians! Kurland himself is a magical mastermind, flawlessly recreating a bygone world, adeptly linking his primary and secondary protagonists, generously offering escape into a brilliant and terrifying time, and, wisely, ending with a warning.

"We have cut off one tentacle of the beast," the duke said, "but the creature still lives, and it will grow another and another it will not be stilled until governments cease trying to establish their legitimacy by stirring up ancient hatreds and false rivalries, and join in a commonwealth of nations."

"'Till the war-drum throbb'd no longer, and the battle-flags were furl'd in the Parliament of man, the Federation of the world'" recited Cecily.

"That will not happen in our lifetimes," Benjamin said.

"Nor our sons', nor their sons'," said the duke, "but it must happen if we are to survive without blasting ourselves back to savagery or oblivion. For the weapons are getting more powerful and the wars are getting more absolute."

"Tennyson goes on: 'Yet I doubt not thro' the ages one increasing purpose runs, And the thoughts of men are widen'd with the process of the suns.'"

"It's always good to end on a hopeful note," the duke said.
–Jeanne M. Jacobson, The Drood Review of Mystery